some (p)arts in books as well

c a l c – Casqueiro Atlantico Laboratorio Cultural – its original meaning, when Casqueiro, the old mill house which we transformed into our “telematic laboratory“, was our mothership. it is the name of the collective which Teresa Alonso Novo and i did imagine already 1990 in Basata at the Red Sea in the Sinai. we spoke about the place where you imagine, experiment, meet, sleep, cook, play, build and rebuild art. the relational, and what we few years later called the aesthetics of the relational, was and is at its center. but 2009 we felt into a deep sabbatical sleep – until 2019. we never finished to collaborate, just that life had some other ideas and tasks for all of us. so here i gonna show you (for now) just the PIXCELL – which is the c a l c e l l – it multiplies its “relationalities” by doing internal/external collaborations and projects. by going on and crossing other ongoes. until know you see just a simple png_file which gives you an overview of what we did (or didn’t) and where. but whenever i got some time i want to profound this infographic with other layers, like for instance the time- or evolution-layer. subscribe to my newsletter if you wonder..
the projects which here are only icon-outlined you can find everywhere around in all 5 sections of this site.

today c a l c can mean everything, its up to you. when we moved to Seville and sold all houses (except the sleeping house) in L.A. i was proposing the c a l c = tool, which generated all the answers (until 03/2015) people gave.. tell us, what = c a l c? 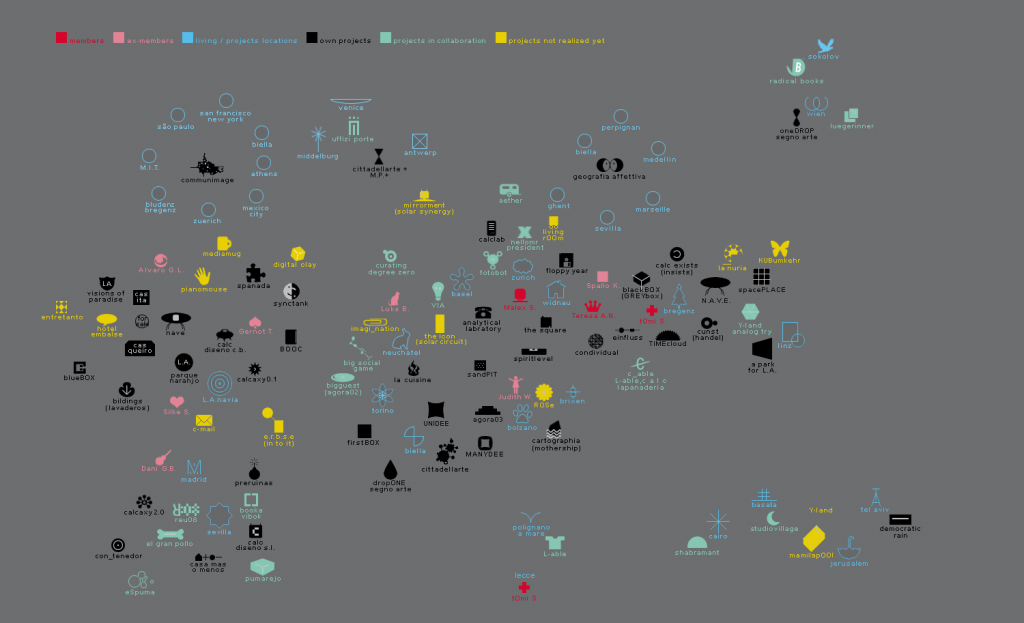