this very first installation we did as c a l c – Teresa Alonso Novo, tOmi Scheiderbauer, Luks Brunner and Malex Spiegel – we did in the entrance of the old theater of Bregenz. this was the welcome-piece. it was supposed to give an idea on how c a l c, and its telematic mothership Casqueiro would become and be: a light-beating, light-breathing, light-thunderstorming building (‘Bilding‘). when nobody was tipping one of the four naked touch-sensors on one of the vitrines side the 10 small lights within the carton model where gently beating through an easy going rhythm. by touching the north-, south, east- or west-sensor you could change completely the sequences and rhythms of the light-beats . as more people were playing on more sensors as more impulsive it got. the 10 lights were all extremes – extreme cold, hot, shiny, fluffy, etc.

the other works we were showing this 4 weeks-period was BLACK_GRAY_WHITEBOX during the weeks we were present in the foyer. to meet people and discuss our intention to move to the nothwest-atlantic spanish coast to experiment a telematic laboratory – ‘the interactive studio-structure, the infra-sculpture’. the other work we were showing was a kind of synchronicity-piece, in which we combined contemporaneous pairs of historic photographs of Navia, where Casqueiro was build, and Bregenz where it stopped over. one pair was – on one side – with Casqueiro itself when it still was active as a mill house, and – on the other – the Kornmarktsaal in the same year when it was transformed from the towns old corn house into the theater. (more’bout it soon, i have to find these files first) 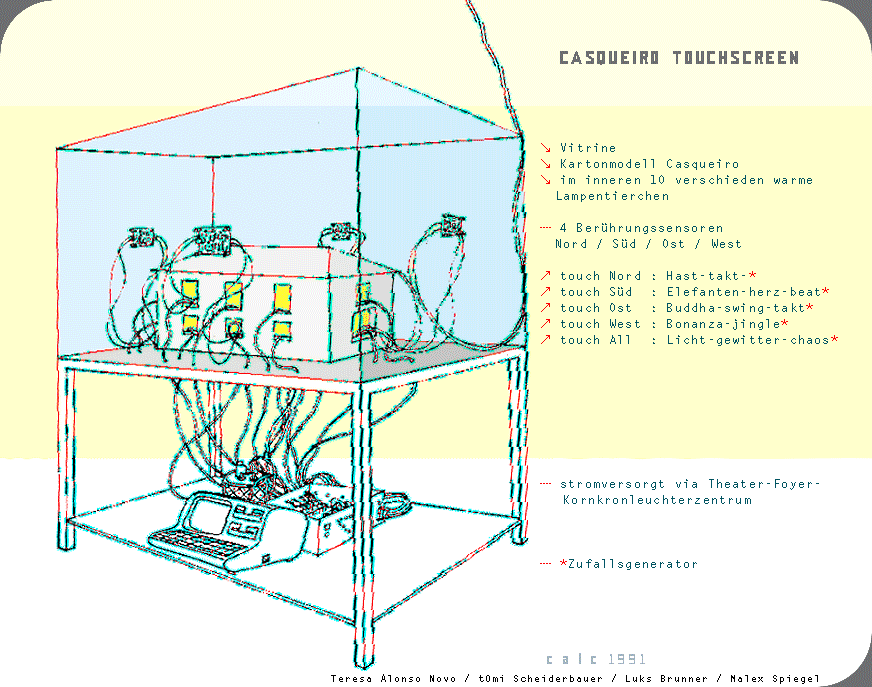