After the workshop in June 2018, and many months of working on the basic structure and general aesthetics of the map, we wrote this letter in March 2019 to all those whose projects and initiatives we wanted to edit on LECCEBILITÀ. “We” are Daniela de Rosa, a friend, architect and Lecce connoisseur who assists me in the Project and me:

Dear ***, we want to make the city of Lecce more accessible and communicable and therefore design and publish a special map – an ALTERNATIVE, MULTICULTURAL and UNCOMMONLY CITY MAP. The aim is to give mainly MIGRANTS and TOURISTS, but also curious citizens a new reading of and a different access to the city. LECCEBILITÀ is funded through a crowdfounding and once printed and folded (A1 – 59.4 x 84.1 cm) it will be distributed to and sold exclusively by (mainly african) street vendors.  – the proceeds of the sale will remain in their hands at 100%. The map will not only be full of alternative and sub-cultural information, but also the most beautiful possible! The attached example shows you the process of our work so far and gives you an idea of its aesthetics an structure. All the points that we want to transfer on the map of Lecce have, in one way or another other, a CULTURAL AND/OR SOCIAL REFERENCE. There will be no room for logos,  sponsors and purely commercial projects (except the few collaborators which we’ll add bellow on side B). That’s why we’re contacting you – because we’d like to add your project! Please send us.. etc., etc. …

..and everything started off so well! I had my idea for the MUTTERMUSTER at least as an outline clear, and worked 100% on these two projects – over weeks and months – in the morning on MUTTERMUSTER, in the afternoon, in the evening and sometimes at night on LECCEBILITÀ. Our goal was to hand over the map to our African friends by mid-June at the latest, i.e. to organize a big celebration at KNOS to leave them solemnly to their hands and their sales channels. Finally! Meanwhile I had also spoken with Amadou of MODUMODU. I had suggested to him that he take over the distribution, so that MODUMUDO should be the official publisher and that together we distribute the maps via his network. He was (and is) very interested. Yes, everything went really fine and nothing could stop us, there were only a few points missing that I wanted to edit – then the English correction and ready to print!

But then, see my CV under the first item “I AM“, I got swollen feet, and the longer the examinations lasted, the more dramatic the diagnosis became. That’s why I had to stop all work at the beginning of June and dedicate myself fully to this new challenge.

And that’s why you only see a 99% project here – there are some points missing as I said – on the map and in the index at the end of page B. I also wanted to experiment with the light and colors on page B once again.
But just.. “it’s what it is, love says”..and until further notice – sure by early 2020, I won’t be able to finish the project.

Thanks to all my supporters in K.O.G. for their trust and patience! Thanks to citta fertile for their help in the starting phase and during the workshop! Thanks to the geodesist Federico Cortese for the vector data of his detailed and updated city map! Grazie Dani! 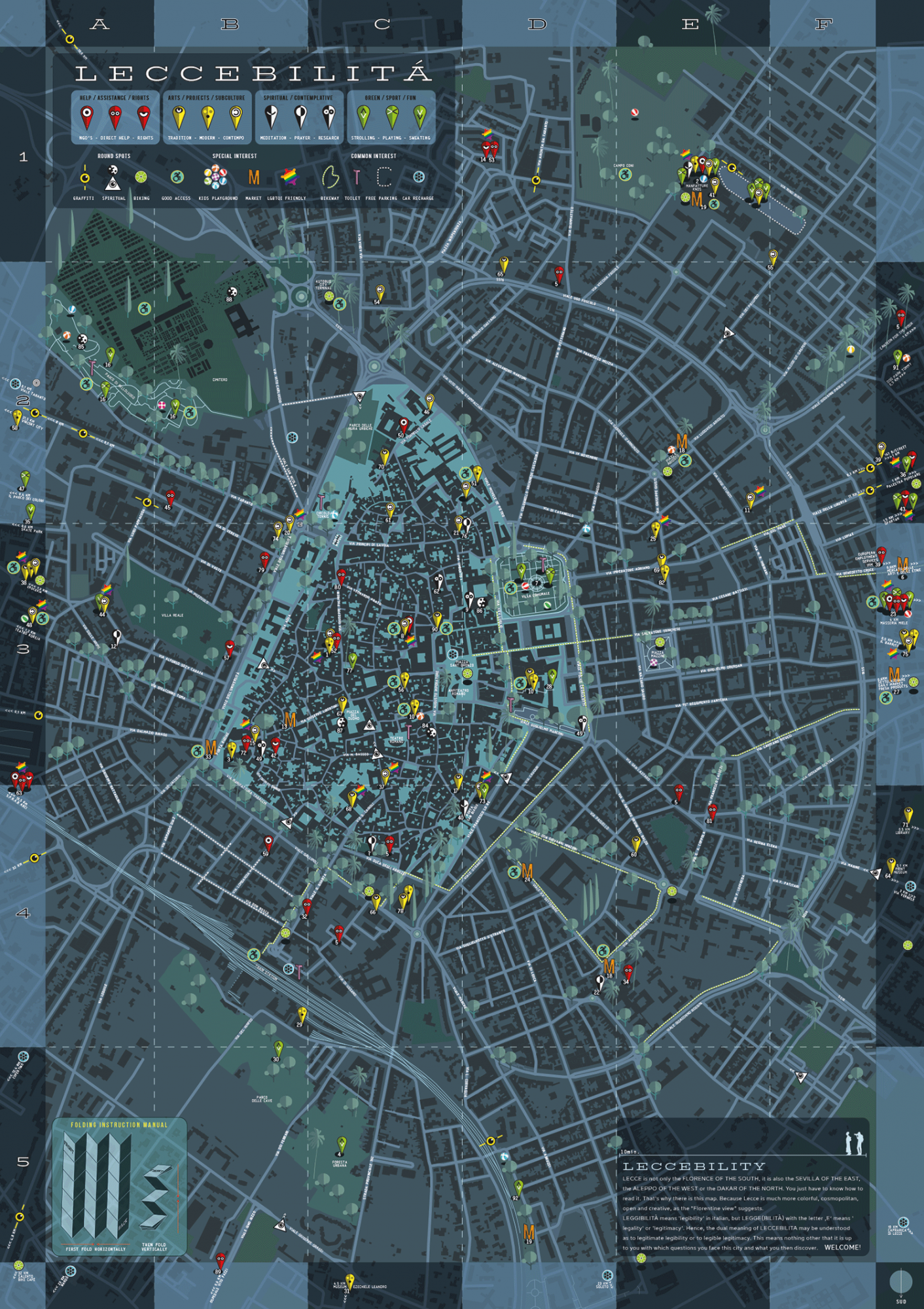 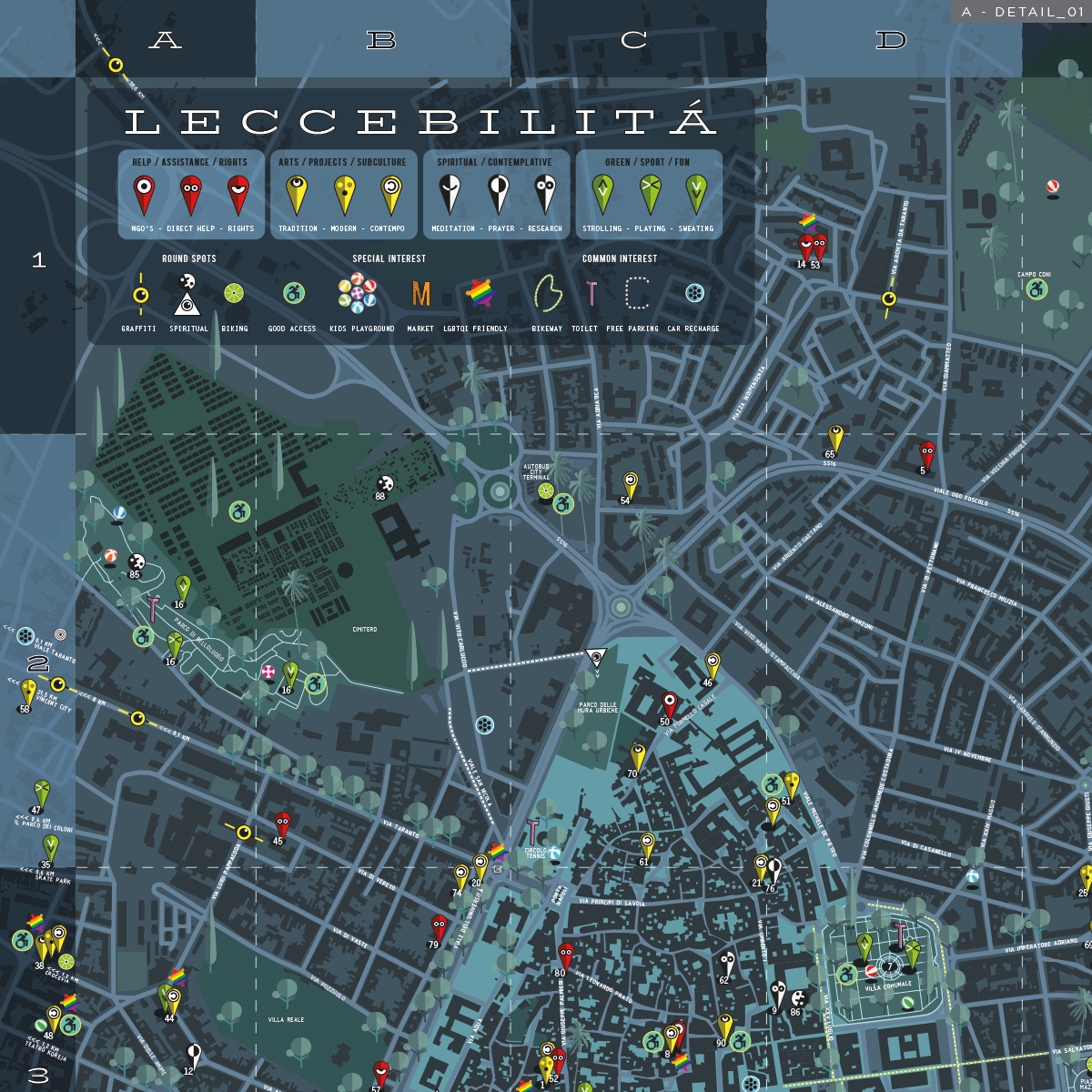 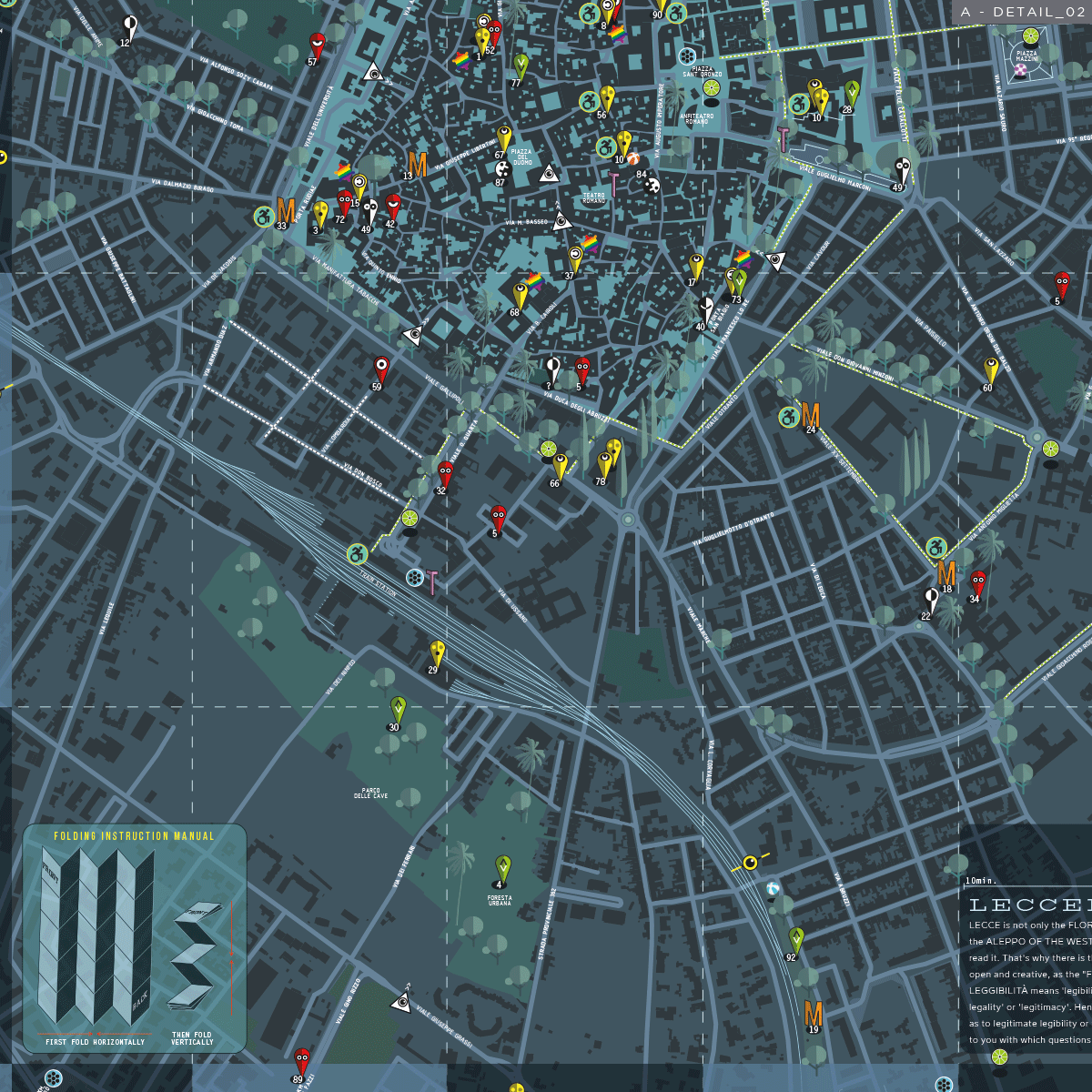 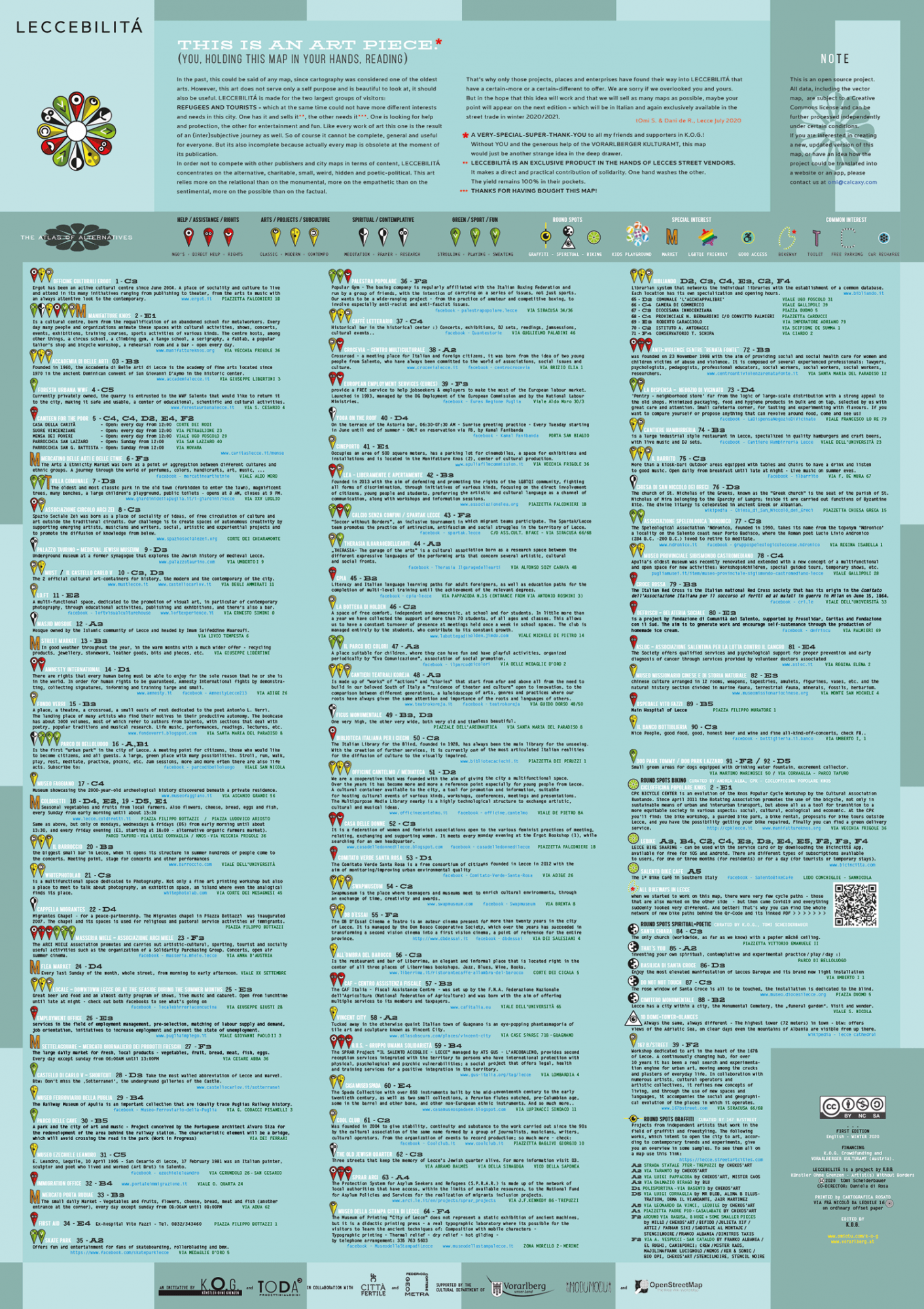 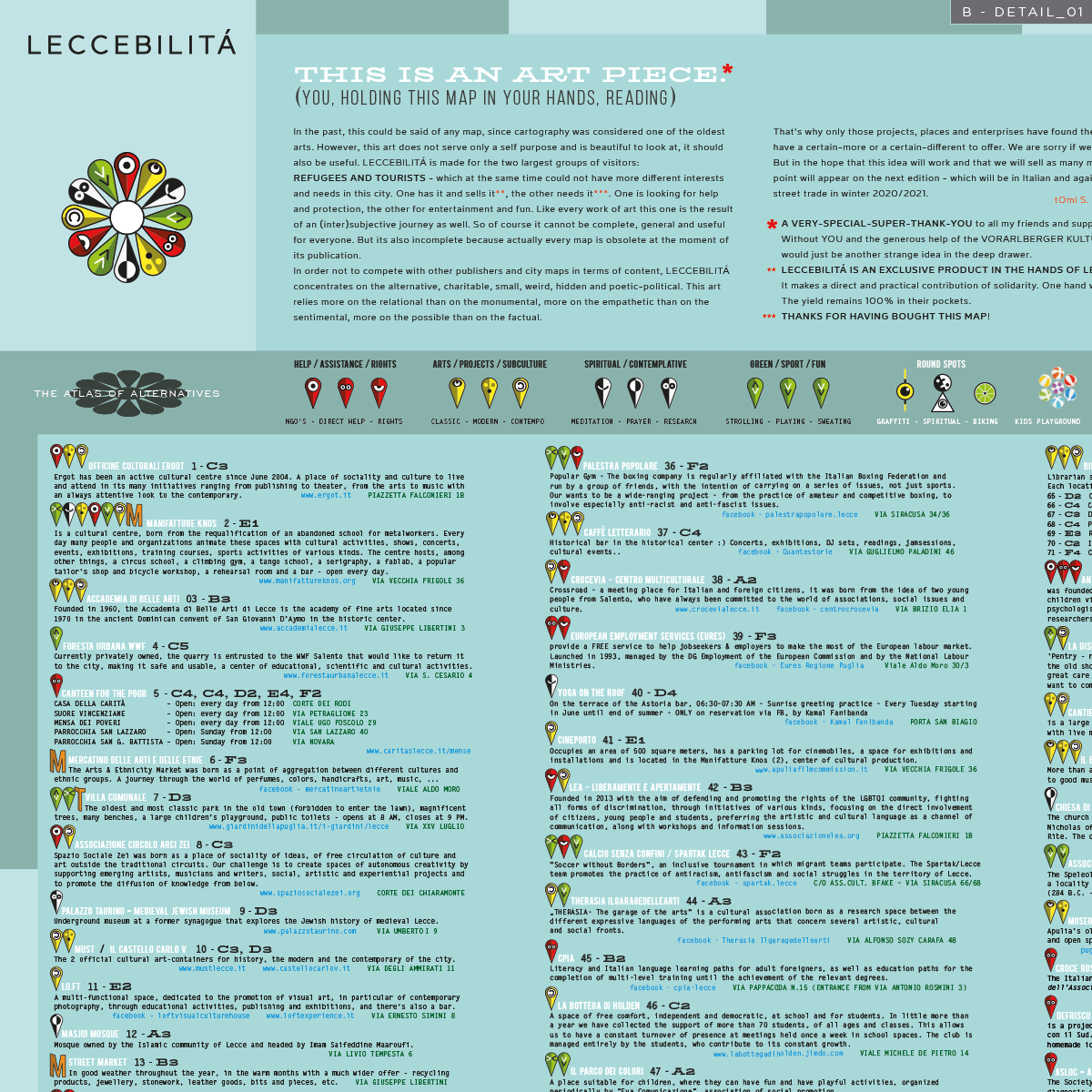 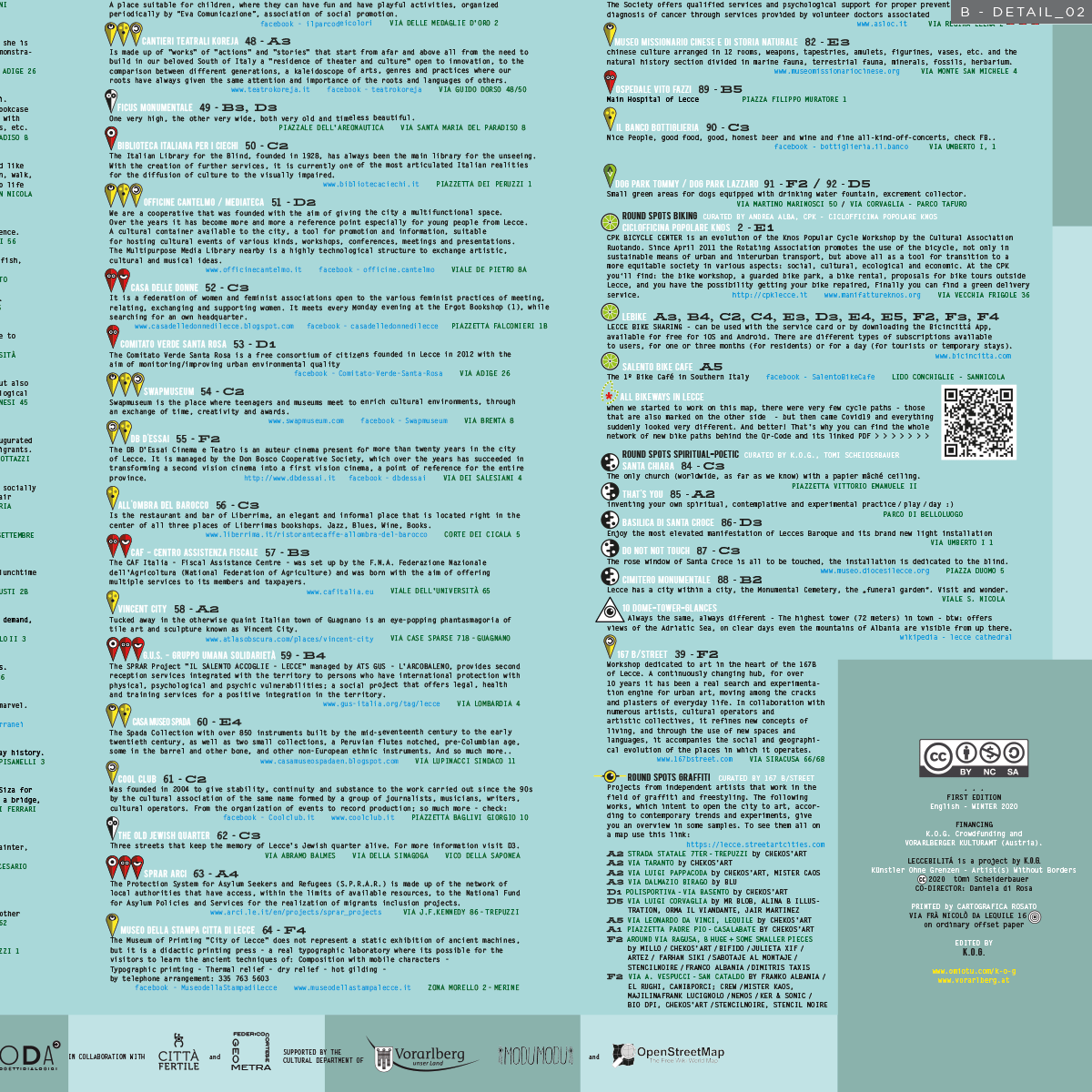